Saphir Shemesh on What's For Dinner? 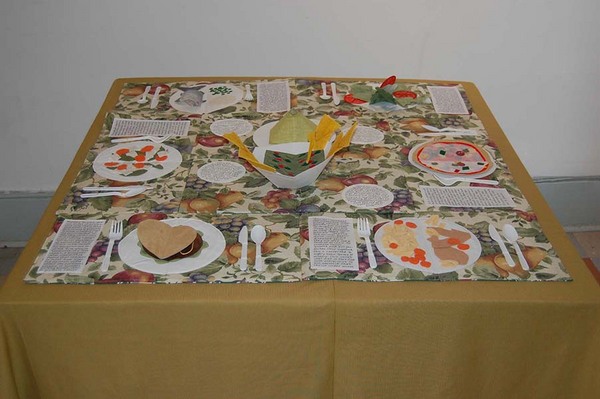 Dinner Conversations in What’s For Dinner?

Common sense seems to dictate that books all have the same make-up of pages of work bound together on one side and bound in a cover. Artists’ books challenge our notion of what a book really is and bring our attention to the physical appearance of the book. What’s For Dinner? by Lise Melhorn-Boe exemplifies how the appearance of a book can be as instrumental in creating an argument as a written work.

Melhorn-Boe only created seven copies of this visually engaging work of art. The book presents the importance of gaining insight about what we eat and being more aware of the health consequences to the human body. By using a unique visual layout, What’s For Dinner? draws in readers to introduce unconventional ideas about the negative effects of food production to the human body.

At first glance, the book looks like a “cute” children’s book. It almost appears to be a game because of the way it appeals to the eyes through the different colors and pop-up effect. It also satisfies tactile sensations through the use of varied textures and patterns. Melhorn-Boe uses materials, such as felt and plastic, to give her table and imitation food a realistic aesthetic. She plays a game with her readers so they can differentiate what is the natural from the synthetic. Through these elements, she makes the reader question the danger of unnatural foods on the body.

In a variety of ways, What’s For Dinner? manipulates viewers’ experiences by presenting serious statistical information in a colorful, pop-up book. Similar to the way dinner food is garnished, Melhorn-Boe serves up her book in an aesthetically appealing way before readers can dig deeper into the content. She does everything she can to ease her readers into her thought-provoking, statistical written content.

As mentioned earlier, Melhorn-Boe created seven copies of What’s For Dinner?. Each of these copies contains the same written work and plates of modeled food. However, the quilted tablecloths change between each copy. The tablecloth in this book is a quilted material. The pattern of the quilt contains a variety of fruits and vegetables all laid together. Using a quilt material, Melhorne-Boe brings a homey and relatable feel to the dinner table from the very first item set on the table. Also, by varying the pattern of the quilt across editions, she claims that no matter which tablecloth you will eat on, the quality of food you eat is what matters. The colors of the book’s stitching are very dull and lifeless, which contradicts the energizing and nourishing effect of vegetables and fruits. Popular opinion causes fruits and vegetable to be dull, but in reality they are the purest form of food for humans to consume. The tablecloths vary between the seven copies, but the content is the same. Thus, Melhorne-Boe wants readers to learn the same material and begin to confront their prior notions of what foods should actually be eaten versus what society tells us to eat.

The book is an accordion book, which means it is folded back and forth instead of a traditional binding. The book folds open so that it can be placed on any table surface. It spreads out into an imitation of a dinner table with silverware, plates with food, and napkins. Melhorn-Boe creates this layout so the reader can open the book on his own dinner table for a personal experience. While typical books open into your hands, this book opens in a much larger space in front of you. It eats you, in the sense that you have a hard time looking at a different subject from where you sit. It grounds the space in one particular area. It also resists the standardized usage of page numbers so the reader can either read the blurbs on the napkins in no particular order or by following the accordion spiral since the writing is not sequential.

In addition to resisting the traditional style of a book, Melhorn-Boe does not write on conventional pages. Instead, she chooses to write on the simulated napkins and cup coasters next to the plates of artificial food with handwritten font. She uses the napkin as the menu to present information about the food being served. The napkin’s handwritten font makes the message more personal than an ordinary font seen on menus at restaurants. Because of this movement away from normative boundaries, the handwritten font creates a unique and customized dinner experience. It is no longer a conversation at a general place, but rather one to have in the reader’s own home about what is written down.

By each plate of artificial food sits a napkin and cup coaster with the writing content. The writing discusses issues related to the foods that sit on the plate beside them. She chooses which foods to depict and write about based on the most common food groups people eat and those are seen sitting on the plate. Her writing strategy seems to use evidence, in the form of numbers, the most common pesticides or hormones in the foods, and facts about how countries around the world treat the research. By using factual information, she is able to make a compelling argument to the reader and force them to face the facts about the foods they consume regularly.

In discussion of Melhorne-Boe’s main argument, one could say she is arguing for people to become more aware of what they put into their mouths before they blindly follow the rest of what society believes should be eaten. Do the research, then decide. This perspective makes a compelling argument. Many readers will not expect to read about such serious issues when they first open such a creative and colorful book. Melhorn-Boe makes the learning more palatable in an ironic way by pairing the heavy, factual content with a light, playful layout.

Most of Melhorn-Boe’s written content focuses on the effects of pesticides, growth hormones, genetically modified crops, and antibiotics. Her strategy is to open each blurb with the main problem. Then, she uses some factual content to back up her claim against the food production industry. Lastly, she states why these issues of production are so dangerous to humans. Focusing on the animal products, Melhorn-Boe traces the conditions the animals are put to live in and how it will ultimately affect our bodies once we consume the food product. She delivers the facts, writing, “residues in meat from injected animals could affect the hormonal balance of humans.” She does not use her own voice through her writing because she wants to give her readers an unbiased opinion about the facts. Therefore, she allows readers to make their own decision about what to do with the information after it is in their hands.

Melhorn-Boe sets her table with common foods most people do not question. For example, chicken is an average dinner for most families. However, Melhorn-Boe describes the growth hormones injected into the chickens to make them develop faster in a small amount of space: “chickens are raised intensively with growth hormones to develop quickly (from 6-8 weeks) in as little space as possible.” She explains the garbage the food production companies feed the chickens, which in turn will impact the health of any human who eats the chicken. Another example is the blurb on the cup coaster describing the jello in the center of the table. Jello is made of sugar substitutes, “acesulfame potassium,” that are so much sweeter than natural sugar; they can cause cancer in animals and can lead to breast cancer or lymphoma in humans. This information is shocking! Parents and schools buy these types of jellied desserts for their children without questioning what the risks may be. By buying all these unnatural products, or artificially altered foods, we are indirectly supporting the food production companies that sell the products. Melhorn-Boe strives to give us the knowledge to decide for ourselves if we want to continue this behavior or not.

Through the title of the book, What’s For Dinner?, Melhorn-Boe opens up the conversation to her readers. She presents her argument in a pleasant way since the question “what’s for dinner?” is often casually asked by children or family members before dinner time. Readers are forced to sit at the table where some light-hearted discussion should ensue, like at a normal dinner table. However, this is not a normal dinner table. The question “what’s for dinner?” is complicated since there is more to the food than meets the eye. When you take a bite out of anything, it comes with a long line of history before it reaches your plate. It is this track to get to the table that Melhorn-Boe is interested in educating her readers about. She forces readers to confront the choices they have made and how gaining new insight will change their future relationship to food. Melhorn-Boe serves up dinner on a plate with a side of factual reality.