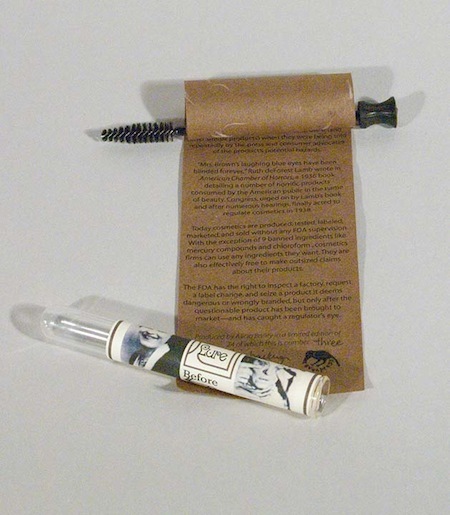 At first glance, Cosmeceutical Collection, an artist’s book by Alicia Bailey, may appear to be like any other book with its thick, pink, hard cover binding. However, one may be surprised to find that the book is not full of pages, but rather, it acts as a box that holds three miniature books in the form of makeup: eyeshadow, blush, and a tube of mascara. Upon opening the eyeshadow case, one will find a mirror and three little blue books in the shape of eyeshadow palettes with the words ‘Tossico,” “Spirito,” and “Bella” written separately on each. Moving on to the circular, compact blush case, inside is an accordion-style story book with words on one side of the page and drawings of women’s faces on the other. The top applicator piece of the book is red and displays a drawing of a woman holding a mask. Lastly, the mascara is held in a glass tube with a picture of a woman’s before and after picture using the product surrounding the tube. Pulling the mascara brush out of the tube will unveil a brown scroll containing a story about cosmetics gone wrong.

With today’s growing media, social standards on feminine beauty have significantly increased to obtain what is considered the “ideal body.” Pictures of celebrities, models, and advertisements for different cosmetics all contribute to the standards of physical appearance, often motivating other women to look the same. Everyone from preteen girls who cake on makeup to look older to aging women who fear wrinkles use cosmetics to alter their appearance in their every day lives. From hair products to makeup, it is said that Americans spend over $30,000,000,000 on cosmetics annually (Wagner). Though these products are meant to boost physical appearances, what people do not know is the dangers and risks that come from using cosmetics. In Cosmeceutical Collection, Bailey advocates that the use of cosmetics can lead to detrimental effects through the potential dangers cosmetics can pose to one’s health. In addition, she calls attention to the superficiality of cosmetics and the deceitful effect is has on altering one’s appearance.

The eyeshadow palette conveys the message about the corruption of cosmetic manufacturing and production. “Belladonna,” as written on the outside case, has two different connotations: deadly nightshade and beautiful woman. When this word is used to describe cosmetics, the contrast in the meanings indicates that cosmetics can oftentimes be misleading. Though makeup may build confidence and create physical beauty, there is still that connotation of “deadly nightshade,” a poison, behind the word that hints at the harmful side effects of makeup. Bailey uses Italian words as opposed to English to hide the harshness of the deeper meaning behind each word. Italian sounds rather romantic and elegant, and it adds an element of deceit to the superficiality of makeup. In this way, Bailey demonstrates how language itself is an aesthetic component of the artist’s book.

Inside the eyeshadow palette, the miniature book “Tossico,” translated as toxic in Italian, speaks to the definition of “Belladonna” and the side effects of such a poison. Bailey uses sarcasm when she ends the list of side effects with “but oh such beautiful eyes,” criticizing how despite the knowledge that cosmetics are full of harsh and dangerous chemicals, women will continue to use the makeup for the sole purpose to look pretty. The flower on the page also indicates that the poisonous plant itself is deceiving, as the plant contains pretty and harmless flowers on the outside but deadly toxins within the plant.

Importantly, the eyeshadow case contains a mirror that reflects the reader’s face. This reflective image allows the reader to consider his/her own face in context of what he/she has just read and to question his/her own actions when it comes to the use of makeup. If one tries to read the words in the mirror, he/she will find that it is completely distorted and that the same meaning is not there. In this way, the mirror and its reflection parallel the result of makeup; makeup can completely disguise one’s appearance the same way a mirror can change the looks of the object in its reflection.

The blush case is another way Bailey demonstrates this power of beauty. The woman and the mask demonstrate how makeup can transform someone into something completely different, as the mask represents the woman’s other identity. Flipping the red applicator will reveal pages with glamorous women on the right side of each page. The women’s sultry faces with defined eyebrows and dark lips signify the ideal beauty society makes up. Following the pictures are sentences that speak to how beauty is the most important thing one can possess, as beauty contains the power to seduce men and ultimately get whatever one wants. In a mocking way, Bailey presents the superficiality of how beauty can buy anything and stresses that makeup should not be the only way one can show his/her beauty.

As the last piece of makeup, the mascara represents the problem over cosmetic safety and the lack of regulations present in society. Bailey uses a story about dangerous eyelash dye to exemplify her point that cosmetics can be dangerous to one’s health and beauty. The paper wrapped around the glass tube displays the effects of non-tested makeup through the before and after picture of a woman who used mascara. The before picture displays a woman of natural beauty while the after picture displays the same woman miserable with fingers prying her eyelids open in a vicious way. This direct display on the cover of the product is quite ironic, as the product’s purpose is to make one beautiful, but instead it has the opposite effect and blinds the user, making her not only less attractive but ultimately disabled. The font of the label “Lash Lure” contrasts the horrors of the image through its feminine, luxurious curves and design. It is as if Bailey is making a point that many companies are misleading in their products when they cover up the dangers of using the product with appealing designs in its appearance.

Looking at the artist’s book as a whole, Bailey presents the issues of cosmetics in such a way to get the reader to think first hand about the issues. The reader must pick up each object, which places the issue directly in the palm of his/her hand. This action is in hopes that the reader will question his/her own actions toward this issue and whether he/she should continue or change whatever he/she’s been doing. Another thing to note about the artists book is that the three trays the books sit on are of different shape, size, and depth. These differences demonstrate how people are all unique and different in their own way. However, the makeup overpowers their uniqueness to unify all of them and create the ideal image. The box also exhibits tactile texture through its rugged surface to indicate the harsh and disturbing consequence that can arise from using a certain product.

Through Cosmeceutical Collection, Bailey effectively conveys her concerns for the need of regulation on beauty products and that physical beauty is not the only form of beauty one can possess, but it is the beauty within that truly matters. The presentation of the artist’s book plays an important role in communicating this standpoint, as the visual aspect encourages participation that a textual book would not provide. With Bailey’s points in mind, maybe it is time society today should do something about bettering our products and producing more environmentally friendly and healthy cosmetics, as well as reconsider what the media is doing by portraying this superficial image of beauty.