At the beginning of his book Art and Animals, Giovanni Aloi asks, “can art...contribute to the defining of new and multi-focal perspectives on nature and the animal in order to move us beyond ourselves?” Several of the artists’ books held in MARBL’s collection respond to Aloi’s question with a resounding “yes.” Combining the artist’s books’ unique way of inviting reader interaction with varied and often surprising representations of animals, artists’ books can help us re-evaluate the ways we understand and think about nature and nonhuman creatures. The books explored here call into question our received ways of engaging with animals and, in so doing, ask that we rethink what it means to be human.

Challenging the idea that humans and animals are fundamentally different and separate, Sara Press’s Evolve=Unroll illustrates how nonhuman creatures helped make human beings what they are today. Curled inside a white, felt egg, readers draw Press’s paper snake out of its shell by unrolling its twisting body and following the words printed there. Reading the snake, we learn the suggestion of “Snake Detection Theory” that we humans evolved our visual acuity from the necessity of spotting snakes, a potential danger to primates such as ourselves. As Press’s book tells us, too, “evolve” comes from “to unroll” in Latin. As we unroll this paper snake and use our highly specialized eyes to read its text, we are invited to ask how much our own human unrolling we owe to nonhuman animals, even those as unlike us as snakes. 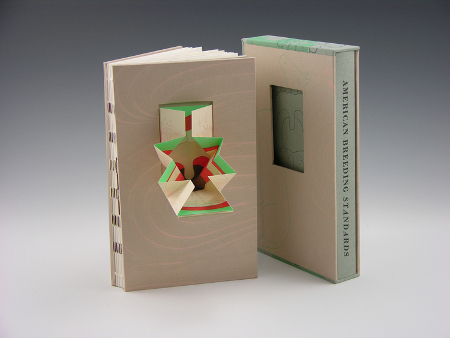 Some artists’ books draw attention to features and experiences humans and nonhumans share in common. Ellen Knudson’s American Breeding Standards, for instance, pairs illustrations of female organs and bodies with illustrations of horse bodies and parts of horses. The accompanying text points out inferior horse qualities such as a “goose rump” and “roman nose.” On another page, it notes good or “standard” human female attributes such as a torso with “ribs…evident and countable” and a neck without “fat, folds, or wrinkles.” This pairing of “good” and “bad” horse qualities with “good” and “bad” qualities of human women critiques modern standards of beauty that treat women like animals and animals like women. That horses are bred to fulfill strict standards of function and beauty is a known fact; the suggestion that modern society “breeds” human women to hold themselves to similar standards seems at once humorous and accurate. Ultimately, American Breeding Standards offers a playful yet sharp take on the cultural celebration of bodily conformity that makes both women and horses suffer.

Other pieces take advantage of the uniqueness of the artist book as a medium of expression to represent animals in unexpected or rarely-seen ways. Elizabeth Sanford’s tunnel book Backyard Food Chain invites onlookers to glimpse an ecosystem in miniature. The book depicts relationships among eaters--layers of bright green leaves for the caterpillars, and a nuthatch peering down from her perch at the potential prey below--that are familiar yet rarely seen by human eyes. As Sanford explains, this scene “features one of the many battles for survival that enfold in the woods behind my house.” Given that the battle depicted in Backyard Food Chain represents one of many, the book invites us to think about not only this particular moment of animals interacting with each other and their environment, but also about the many other, often invisible interactions among creatures taking place during any given moment. By looking closely at the detail rendered in Sanford’s book, we might be encouraged to look more closely at the scenes, battles, struggles, and triumphs unfolding in our own backyards. 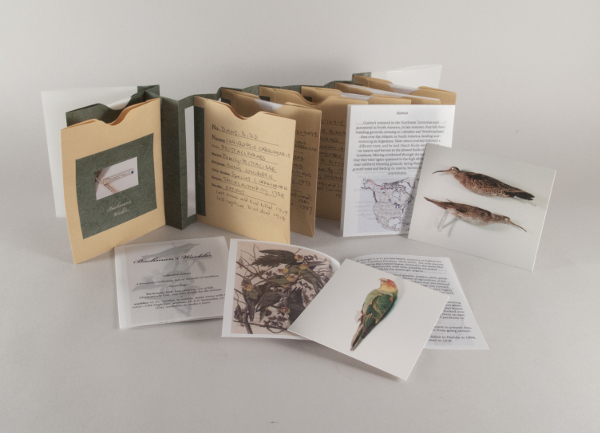 Finally, several artist’s books reflect on the dangers facing many animal species today. One such book, Alicia Bailey’s Extinct/Extant, commemorates the creatures who have disappeared from the earth by looking closely at what remains of them: in this case, a collection of bird skins preserved in the Denver Museum of Nature and Science. A series of envelopes bound in an accordion structure detail the taxonomic information of each bird specimen, including order, family, genus, and species. Inside the envelopes, extended descriptions of each kind of bird elaborate on the basic scientific data. Presented in this contemplative way that both recalls the lost birds and highlights what remains of them (both the data and the bird skins themselves), Extinct/Extant seems to wonder just how our knowledge of and familiarity with these animals may have changed were they still alive. As illustrated by these examples, artist’s books about animals can help us not only see animals in new ways, but also consider the importance of helping them share an earth with us into the future.

Art and Animals by Giovanni Aloi