Artists' Books and the Natural World

In a time of mass species extinctions, extreme weather, colony collapse disorder, rising oceans and melting icebergs, thinking about the natural world and humans’ place in it can be a daunting and even depressing challenge. In response, many book artists have looked to their craft for ways to raise awareness about modern day ecological crises and to emphasize the potential for mutually beneficial and often beautiful interactions between people and the environment.

In Postulates, Elsi Vassdal Ellis examines the unexpected and overlooked places of intersection between built, human environments and the territories carved out by plants, animals, and other nonhumans. In Ellis’s book, a tiny black dot or line on a piece of parchment paper marks a point of hybridity between worlds commonly understood as either “human” or “natural.” The order implied by asphalt roads divided by painted, yellow lines is disrupted by a single green leaf, fallen from a tree unseen; on another page, weeds push through cracks in cement. Ellis’s work shows how even “human” spaces are shared with nonhuman actors and forms of life, a fact that calls for a greater attention to the ways we live alongside a range of creatures right in front of our eyes but hidden from our awareness.

Field Studies No. 15, Lupinus albicaulis (Without Apology) by Andie Thrams

By exploring remote forests in Alaska and California, writer, painter, and book artist Andie Thrams captures the essence of each of the vibrant, wooded places she visits. In Field Studies No. 15, Lupinus albicaulis, or Without Apology, Thrams offers an intimate look inside the northern Sierra Nevada using twig, brush, pencil and pen as her tools. By painting on paper stained with the wild fungi native to the region, Thrams’s work celebrates her experience of a forest’s life: the color and character particular to each forest immerses viewers thanks to the artist’s meticulous attention to detail. Indeed, across all of her books, it seems that no two of Thrams’s flowers, stalks, leaves, or trees are alike. 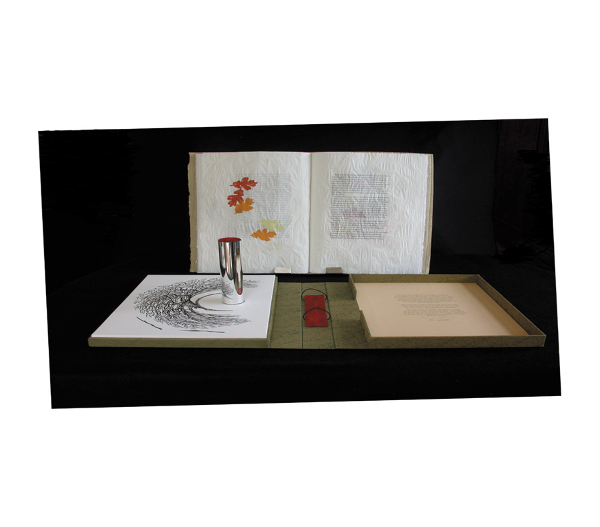 Direction of the Road by Foolscap Press

Finally, Direction of the Road from Foolscap Press asks us to envision life as experienced by a tree. Adapted from the Ursula LeGuin short story of the same name, Direction opens to reveal LeGuin’s story printed on linen paper, a cylinder wrapped in reflective paper, and a woodcut by Aaron Johnson. By placing the cylinder next to the woodcut and looking into the reflective surface, the woodcut is transformed from a wide portrait of intricate lines into a many-limbed tree with a human seated at its trunk. In LeGuin’s story, the narrator proclaims, “I am an oak, no more, no less. I have my duty, and I do it; I have my pleasures, and enjoy them, though they are fewer, since the birds are fewer, and the wind’s foul.” By reading LeGuin’s words and looking at the woodcut tree reflected in the cylinder of the artist’s book, we can begin to imagine how a tree understands itself and its place in the natural world, and how a tree might, in turn, view us.