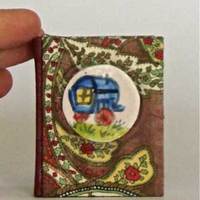 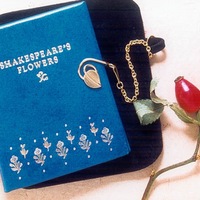 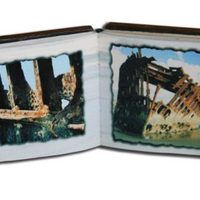 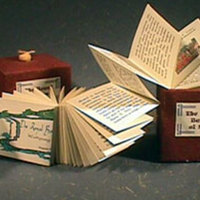 The Manuscript, Archive, and Rare Books Library possesses a number of remarkable miniature books: a copy of John Murray Forbes’s extremely rare 1863 miniature of the Emancipation Proclamation, a selection from the pro-Hitler Der Führer macht Geschichte propaganda series of 1933 to 1938, and a souvenir panorama of the 1939 New York World’s Fair contained in a walnut shell. Miniatures, which are books under three inches in height, satisfy desires to explore extremes, and they captivate readers with the precision and attention to detail required to make them. Along with these historically significant books, MARBL has taken a keen interest in collecting miniature artists’ books from important independent presses. The books above are representative miniatures from four book producers that have been recognized internationally and by the Miniature Book Society: Peter and Donna Thomas, De Walden Press, Mystical Places Press, and Pequeño Press.

Peter and Donna Thomas began making miniature books in the early 1980s. Their first miniature book, Yotan’s Vision, was made with paper scraps from Granite and Cypress, a remarkable fine press book by William Everson (Peter Thomas studied with Everson at UC Santa Cruz). The couple has made hundreds of limited edition and one-of-a-kind miniature books on themes such as nature, music, literature, and traveling. Most of the miniatures feature Peter Thomas’s handmade paper and Donna Thomas’s watercolor paintings. The Thomases value miniature bookmaking not only because it is economical, but also because of the charm and delight such books offer their readers; as Peter declares, “When you hold a miniature book in your hand, it is like holding a jewel. Although some need magnification to be read, most can be enjoyed with the naked eye. They are indeed like jewelry, with words and images instead of gemstones and wonderful structures instead of precious metals.”

Jan Kellett’s De Walden Press was founded in Malvern, England in 1996. The press relocated to British Columbia, Canada seven years later. Kellett, who was trained as a bookbinder, has made miniatures inspired by nursery rhymes and antique dolls, but she is perhaps most well known for her books on Shakespeare. Some, such as Shakespeare’s Flowers and Shakespeare’s Harvest, focus on themes within the writer’s plays; others, such as Shakespeare: Man of Property, concentrate on Shakespeare’s biography. MARBL is the only library in the world that has the complete collection of De Walden Press miniatures.

Jill Timm established her imprint Mystical Places Press in Austin Texas in 1998. The press relocated to Wenatchee, Washington in 2002. Timm has produced large artists' books with flag book structures and even 3D photographs, but she is most well known for her extensive output of miniatures. Most of the books from Mystical Places Press focus on landscapes and natural beauty. MARBL possesses about thirty of Timm's books, many of which showcase Timm's nature photography and her use of natural materials not typically used in bookmaking. For instance, some of Timm's books have covers made from clay, sand, and leaves. The book shown above, Ship Wreck: The Peter Iredale, is bound between two small but very heavy pieces of steel.

In the 27 years it was in operation, Patrice Baldwin's Pequeño Press published 71 limited edition, hand-bound miniature books, two of which won the Miniature Book Society's Distinguished Book award. Pequeño Press was established in 1984 and was originally centered in San Miguel de Allende, Mexico while Baldwin was teaching at the Instituto Allende and Bellas Artes art schools. In 1990, Baldwin moved the press to Bisbee, Arizona; according to Baldwin, the ten years during which the press was situated in Bisbee were the most productive and exciting years of Pequeño Press. Pictured above is an accordion book, The Royal Barges of Siam, which was made at Pequeño Press during this time period.

"About the Artists" Section on Peter and Donna Thomas's website